$7.8B
Reduced fuel costs due to improved grid efficiencies

Every minute of every day, we coordinate and direct the flow
of electricity over the state’s high-voltage transmission system. 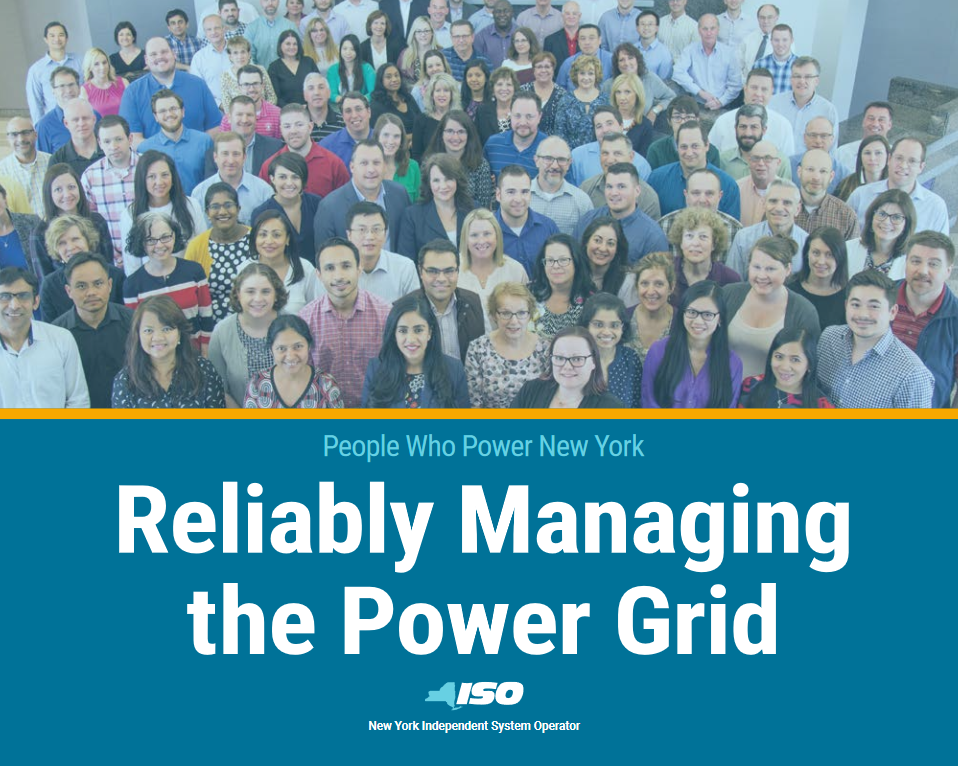 This 12-page eBook examines the transformational impact we have had in our 20-year history reducing emissions and designing the grid of the future.

What is the NYISO?

The NYISO is the New York Independent System Operator — the organization responsible for managing New York’s electric grid and its competitive wholesale electric marketplace. We do not generate power or own transmission lines, but we work with power producers, utility companies, and stakeholders to provide power to meet New Yorkers’ electricity needs on a daily, hourly, and minute-to-minute basis. We are committed to a fair, transparent market system because it helps us deliver the lowest cost wholesale power solutions.

The NYISO is charged with reliably operating New York’s power grid, meeting the most stringent standards in the nation, under strict regulatory oversight. The NYISO plans the power system for the future, over one, five and ten-year studies, to maintain long term reliability, reduce congestion on the transmission system, and meet public policy needs calling for new transmission, such as lines to bring renewable resources to customers. The NYISO administers markets and maintains reliability openly and transparently, providing data, analyses, and information pertaining to New York’s power system to policymakers, stakeholders, and the general public.

When was the NYISO formed and why?

The NYISO was formed in 1999 – but its origins began much earlier, based on New York’s need for a reliable electric system.

After the Northeast Blackout of 1965, New York’s seven investor-owned utility companies established the New York Power Pool (NYPP) to coordinate the reliable operation of their respective systems, which was later joined by the New York Power Authority.

After the restructuring of the electric industry in the 1990s, the Federal Energy Regulatory Commission (FERC) began the process of opening access to transmission lines for competitors to buy and sell power, and separating generation, transmission, and distribution services. To provide fair and open access to power, FERC recommended the formation of independent entities to manage energy transmission. At the same time, the New York State Public Service Commission (PSC) established retail electric competition to allow customers to choose their electric supplier. The PSC supported the formation of competitive wholesale markets as the basis of retail choice, and approved restructuring plans by which utilities divested most of their power plants to competitive generation companies.

In 1997, the NYPP filed a proposal with FERC to form an independent system operator (NYISO). Upon approval from FERC, the NYISO officially took control of New York’s electric power system on December 1, 1999, with a charge to design, deploy, administer, and monitor New York’s wholesale electricity marketplace.

What does the NYISO do?

We manage the flow of electricity throughout New York to ensure it’s produced in sufficient quantities, and transmitted where it needs to go — exactly when it’s needed.

The NYISO works around the clock to sustain and enhance regional reliability, plan a more effective and efficient power system for the future, and provide objective information and data to policymakers, stakeholders, and investors pertaining to New York’s power system and electric infrastructure.

Who pays for the NYISO’s operating expenses? Does the cost get passed onto household consumers?

The NYISO’s expenses are paid through a surcharge paid by participants in New York’s wholesale electricity markets. In fact, the NYISO’s operating costs account for just a tiny fraction of consumers’ monthly electric bills.

Is the NYISO a government agency or affiliated with energy companies?

The NYISO is a not-for-profit, independent company unaffiliated with any state or federal agency or energy company. The NYISO is led by an independent Board of Directors. The NYISO’s federally-approved tariffs contain strict requirements for our Board of Directors and all employees to have no financial relationship with any of the companies that participate in our wholesale energy markets. The NYISO is dedicated to transparency in how we operate, the information we provide, and our role as an impartial system operator, planner, and broker of New York’s wholesale electricity markets.

How does the NYISO establish rules for its markets?

The NYISO is accountable to both federal and state regulatory bodies and maintains compliance with nearly 1,000 reliability requirements. The NYISO’s independent Board of Directors collaborates with our stakeholders via a robust shared-governance process that facilitates input from interested stakeholders. The establishment of the NYISO created a system of shared governance that provides all market participants — from utility companies to electric generators — a voice in the operation and evolution of the marketplace.

Under the NYISO’s transparent, inclusive process, representatives from market participants have voting power to exercise responsibilities such as preparing the NYISO’s annual budget, reviewing and recommending candidates for Board vacancies, developing and adopting technical guidelines for operation of the bulk power system, and market design and system planning. NYISO stakeholders share responsibility with the NYISO Board to approve proposed changes to the NYISO’s governing documents, including its federally approved tariffs.

How does the NYISO work to improve system reliability?

On a daily, hourly, and even minute-by-minute basis, we work vigilantly to balance the supply of power from energy producers with the demand for electricity from consumers across the state. We do that by reviewing bids for New York’s day-to-day power needs from a variety of energy producers, allowing us to deliver the most reliable, cost-effective power possible. We work 24 hours a day, seven days a week to “keep the lights on” for all of New York.

Are there environmental benefits to New York’s wholesale electricity markets?

Open access to new, cleaner supply technologies, along with markets that incent more efficient power plants, greater integration of renewable resources, and demand-side energy efficiency have contributed to a significant reduction in New York’s electric-related emissions. According to the U.S. Environmental Protection Agency, power plant emission rates in New York have declined significantly under a competitive market structure. From 2000 to 2013, carbon dioxide (a greenhouse gas), nitrogen oxide (a contributor to ozone pollution), and sulfur dioxide (a contributing factor to acid rain) emissions have dropped by 41, 81, and 94 percent, respectively.

How does the NYISO address New York’s demand for electricity in the most cost-effective way?

Since assuming responsibility for New York’s wholesale electric system, the NYISO has implemented efficiencies and changed the way in which peak demand is addressed — ultimately saving resources and money.

Prior to the NYISO, New York’s electric system addressed growth in peak demand by increasing generating capacity accordingly. Today, demand response resources are used to shave the peak during periods of high demand.

When a new all-time peak was recorded on July 19, 2013, demand response programs helped to “shave” peak demand by approximately 1,000 megawatts. That’s the equivalent of two large power plants that did not have to be built and operated. Ultimately, that puts less of a strain on our electric system and saves New York residents and businesses money.

How has the NYISO helped enhance New York’s power system?

Since the NYISO began operating New York State’s electricity markets in 2000, New York has added more than 10,000 megawatts of new generation—with 80% sited in high-demand areas. These new additions represent 27% of New York’s electricity requirements. Less efficient power plants have either deactivated or repowered with more efficient equipment. While requiring greater up-front investments in terms of building and construction costs, in the long run, this approach saves New York because costs associated with transmission have been reduced or avoided.

What role does the NYISO play in planning and investment in New York’s electric system?

The NYISO plays a critical role in planning and encouraging investment in New York’s electric infrastructure. In fact, government officials, Wall Street investors, and energy industry professionals across the nation and globe rely on the NYISO’s authoritative data and planning expertise. We plan for New York’s power system by:

Since launching our planning process in 2005, the NYISO has conducted many assessments, several of which identified emerging reliability needs. In each case, the markets responded to address the needs. The NYISO also closely reviews proposed grid infrastructure projects to ensure they will interconnect and work to sustain reliability.

What is the grid and how does the NYISO interact with it?

The grid is the system of interconnected energy infrastructure — power plants, transmission lines, transformers, substations, and distribution lines — that move power from suppliers to utilities and then to all New York residents and businesses.

New York’s electric grid is part of the Eastern Interconnection that extends from Canada to Florida and from the Atlantic Ocean to the Rockies. The NYISO remains in constant contact with other power grids in order to monitor the flow of electricity to efficiently meet reliability needs, and to facilitate and coordinate purchases and sales of electricity in New York and across neighboring regions to meet consumer demands at the lowest possible cost.

What is the "smart grid" and what is the NYISO’s role in developing a smart grid for New York?

In 2013, the NYISO and New York’s transmission-owning utilities and power authorities completed a statewide $75 million smart grid initiative, supported by $37.8 million in funds from the U.S. Department of Energy. Incorporating the capabilities of the smart grid project and other advanced technologies, the NYISO’s new control center is a showcase of advanced technology, driven by the need for a smart grid to power New York’s future. Together with energy suppliers, policymakers, and stakeholders, the NYISO is working to transform our current electric grid into a smart grid that will help New York transition to a more energy efficient future.

How have NYISO markets changed the electric industry in New York?

What impact does the NYISO have on efficiency?

New York’s competitive wholesale electricity market incentivizes electric generators to invest in upgrades and new power plants that improve fuel efficiency. That means that less fuel has to be used to make electricity, which saves consumers money and avoids emissions to the environment. When power generators are forced to compete to provide energy for the state, they are more likely to prioritize operational efficiency so they have a better chance of being selected to supply energy. Competition has reduced the amount of fuel used to produce electricity. During that period, New York’s electric system improved its fuel efficiency at a pace three times the national average.

What effect has the NYISO had on consumer costs?

Greater efficiencies in how generators produce electricity under NYISO markets have shored up reliability and thus led to a reduction in New York State’s needed power reserves. Before the NYISO, utilities were required to produce significantly more power than was being consumed for the sake of having a “buffer” in the event of a power emergency. Typically, New York’s electric system maintained 22% reserve margins above the highest amount of electricity expected to be consumed on the summer peak day in the coming year. Since the formation of the NYISO and onset of competitive electricity markets — which brought with it greater reliability and efficiency — reserve margins have declined. Instead, the power they produce is much closer to consumer demand, saving utilities money and resources which translate to lower costs for end-use consumers.