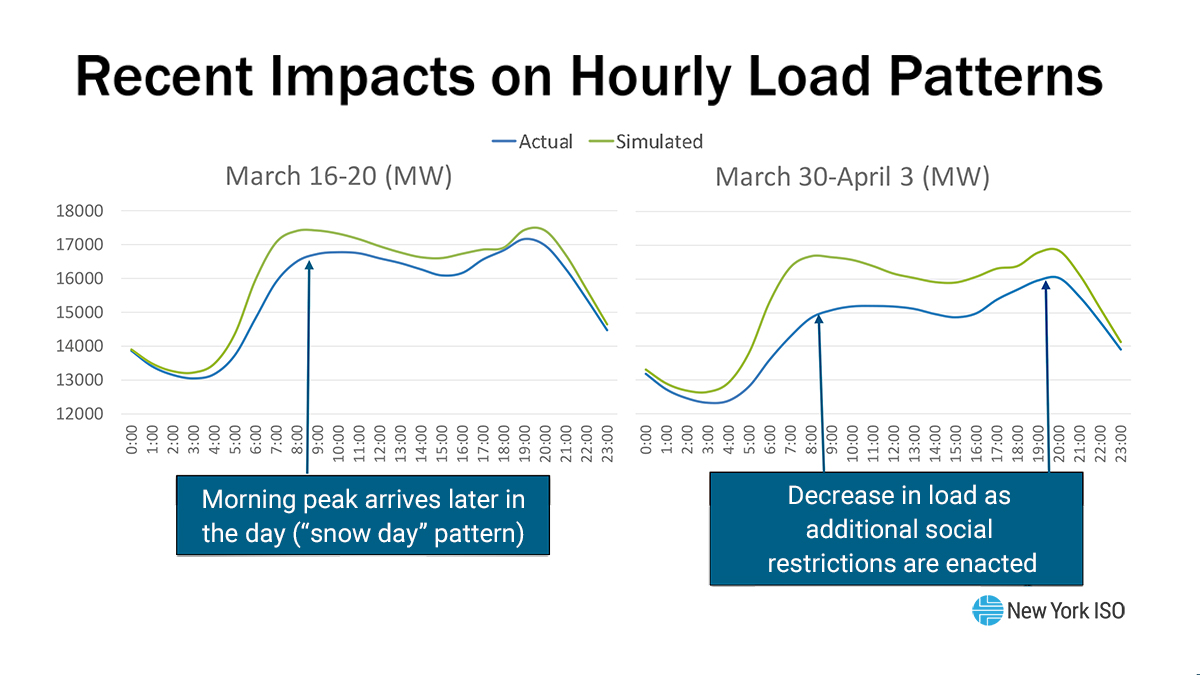 As nearly 20 million New Yorkers adjust their lives in response to the COVID-19 crisis, the changing patterns of behavior are reducing and shifting electricity consumption.

With New Yorkers working from home and limiting social activities to “flatten the curve,” we have observed that load curves are also being reshaped. By the middle of March, energy use on the grid had declined by roughly 2 to 3%, with daily peak energy use (the highest amount of energy used at any point during the day) about 2% below peak for this time of year. During the week that ended March 27, we saw energy use decline even further, with a total reduction of 4 to 5%. By the week ending April 3, that decline was 7 to 8%.

From 6 to 10 a.m., a time when energy use typically ramps up as New Yorkers arrive at work, we are seeing a delay in the timing of the ramp and a reduction in usage up to 9% relative to typical load patterns. That means energy load is increasing later in the day than normally expected, and remaining at a lower level.

The reductions in energy use during the morning ramping period are more pronounced in New York City and on Long Island. Demand reductions of nearly 18% have been observed in those areas during the 7 to 9 a.m. ramping period. Overall, NYC demand for that week ranged from 2% to 18% below typical demand levels.

We have also observed that the morning peak arrives later in the day; patterns similar to what we would see during a widespread snow day. This reduction is being driven by reduced demand from commercial consumers, with an increase in residential energy use, especially during the midday.

This is a unique time for energy use, but changes in human behavior and the calendar constantly impact the grid. Holidays, seasons, weather, and days of the week all affect power usage. In this case, with so many closures and people telecommuting, the change in behavioral patterns is reducing overall energy use, even as some New Yorkers are increasing consumption as they work from home.

Reliably running the electric grid begins with accurately forecasting the load to schedule sufficient electricity supplies. Our forecasting analysts constantly look at upcoming power demands, from a day ahead to as much as 10 years in the future. They do this using advanced computer modeling, based on historical power consumption patterns and expected conditions for attributes such as weather and economic activity.

As a result of recent changes, our planning experts are developing new forecasts. Daily forecasts are heavily reliant on historical data from similar days at similar times of the year to project load patterns.

The sudden departure from historical behavioral patterns caused by New York’s response to COVID-19 is historically unprecedented. As more data is available, our forecasting team will further refine forecasts based on the societal changes we are seeing. These forecasts will help our grid operators prepare for these evolving load profiles.

In addition to monitoring and adjusting for shifting load patterns, we have taken numerous steps to preserve system reliability by protecting the health and safety of our own staff during this time.