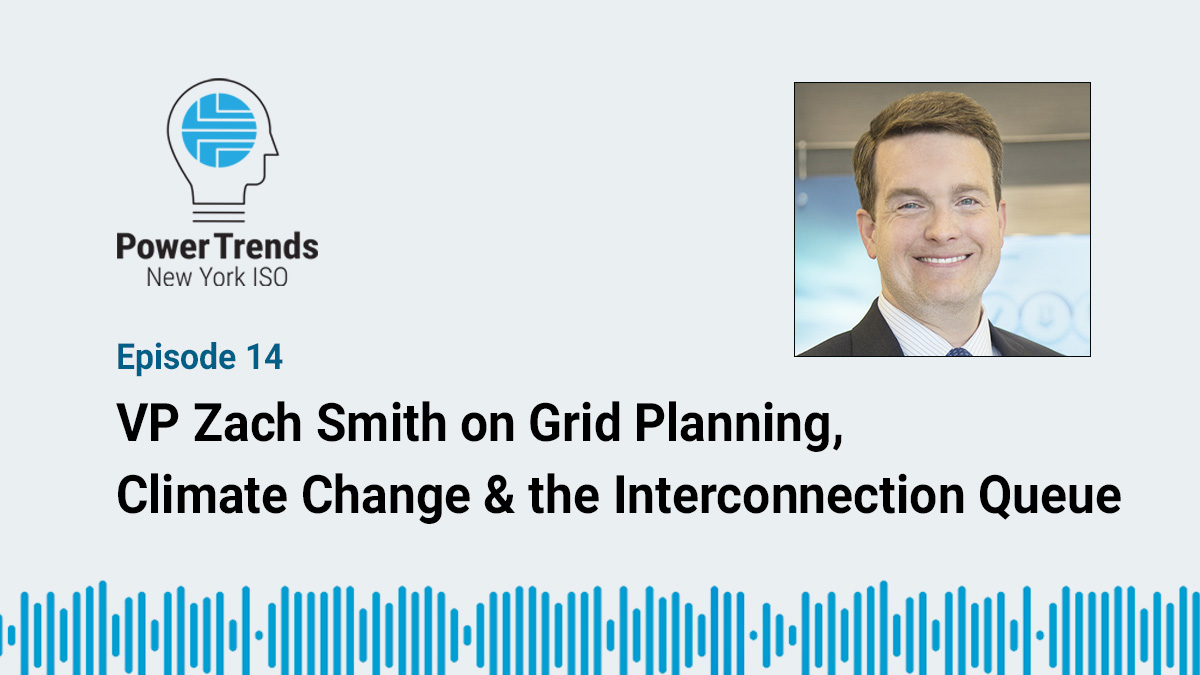 It’s Zach Smith’s job to prepare the New York energy grid for the future. Our Vice President of System and Resource Planning manages the team that looks at all potential reliability issues the grid could face, from a week to 10 years in the future.

The team also looks at all proposed energy resources that seek to enter the grid via our Interconnection Queue process, and the impact these resources could have on reliability. In the past several years, we’ve made changes to the process of approving new resources, speeding up the approval process to reduce the cost to developers.

“We’ve had this comprehensive planning process for many years now,” he said, in an interview with Kevin Lanahan, Vice President of External Affairs and Corporate Communications. “Now, with the changes to the grid, it’s so much more vitally important. We’re encountering all kinds of new challenges.”

New York State’s Climate Leadership and Community Protection Act (CLCPA) sets the nation’s most ambitious clean energy targets. Under the CLCPA, the grid must get 70% of its energy from renewable sources by 2030, as well as be emission-free by 2040.

“Some of the challenges are based around what happens when the weather doesn’t cooperate,” Smith said.

“What if the wind ceases to blow, what if clouds come in and you get less sunshine?” Smith asked. “You are still going to have significant electric demand. You need resources standing, willing and ready to produce, sometimes at a moment’s notice.”

In addition, the changing climate presents its own grid concerns. We recently published our Climate Change and Impact Study, which offers suggestions on where to strengthen the grid in order to keep it resilient in the face of risks to reliability like cold snaps, heat waves and ice storms. We’re evaluating all of the potential conditions and the corresponding economics. The way that we do that is through the interconnection process.

Meanwhile, we continue to see a tremendous number of new clean energy resources that developers are seeking to install in the coming years. Planning for these new resources, a process called the Interconnection Queue, is also a vital part of Smith’s duties.

“We’re evaluating all of that to make sure that the reliability and resiliency of the grid is maintained,” he said. “The New York ISO plays an important role in enabling these new resources and making sure they can interconnect reliably.”