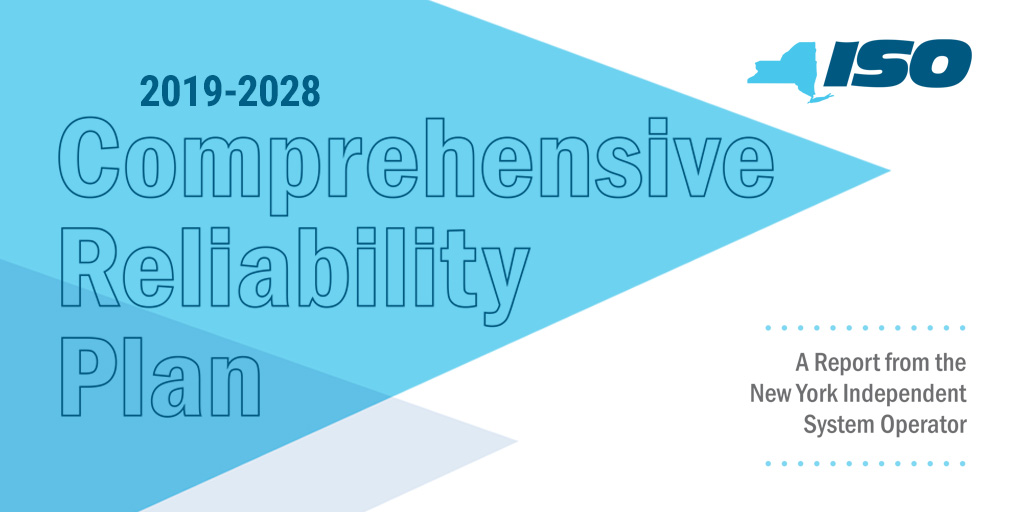 Rensselaer, NY - The New York Independent System Operator (NYISO) Board of Directors approved the 2019-2028 Comprehensive Reliability Plan (CRP) which sets forth the plan for the New York State Bulk Power System to meet all applicable reliability criteria over the 2019 through 2028 study period. The Board’s approval of the CRP completes the 2018-2019 cycle of the NYISO’s Reliability Planning Process.

“The NYISO’s Reliability Planning Process is a cornerstone of our mission to ensure grid reliability,” said Rich Dewey, President and CEO of the New York Independent System Operator. “The process, which involves extensive stakeholder engagement, provides transparency on the expected changes to the grid and the steps being taken to meet electric system reliability requirements. This approach provides developers and investors the information they need to assess and assume the risks of investments while minimizing costs to consumers.”

The NYISO initiated the CRP after the NYISO Board approved the 2018 Reliability Needs Assessment (RNA) in October 2018. The 2018 RNA assessed the resource adequacy and transmission security of the New York State Bulk Power System from 2019 through 2028. The final 2018 RNA identified no reliability needs. While the NYISO concludes that long-term reliability needs have been satisfied in this cycle of the Reliability Planning Process, the margin to maintain reliability could narrow or be eliminated over the ten-year study period based upon changes in assumptions.

Included as a scenario in this year’s CRP was an examination of the Department of Environmental Conservation’s draft Peaker Rule. The rule could affect approximately 3,300 MW (nameplate) of simple-cycle combustion turbines, known as peaking units, almost entirely located in New York City and Long Island. Under the draft rule, beginning May 1, 2023 the current emissions averaging rules would cease and individual units would be required to meet an emission rate for nitrogen oxides (NOX ) of 100 ppm during the ozone season. The proposed rule would also establish more restrictive emission limits that would become effective May 1, 2025.  The draft rule would allow the NYISO to designate units to continue to operate on a temporary basis if needed to maintain electric system reliability while a permanent solution is being implemented.

The CRP peaker scenario shows that if all of the generators affected by the Peaker Rule deactivate without replacement resources or system reinforcements, the transmission system would be unable to reliably serve the forecasted demand within specific pockets in New York City and Long Island, as well as across southeast New York.

The deficiencies in meeting reliability requirements found in this scenario analysis could potentially be met by a number of solutions, including generation, transmission, and demand-side (e.g.; energy efficiency and demand response) measures. Due to potential resource adequacy needs, this scenario analysis found that local transmission upgrades within New York City and Long Island alone would not fully address the deficiencies. Therefore, replacement resources would be required to resolve the identified reliability deficiencies.

The CRP baseline analysis found no reliability needs for the forecasted system conditions over the ten-year study period. The scenario analyses conducted, however, highlight that risks to reliability exist. In the event that there is a potential loss of resources due to a proposed generator retirement or mothballing, the NYISO will administer its Generator Deactivation Process for generator deactivation notices that it receives. If necessary, the NYISO will seek solutions to address any reliability needs identified through that process.

Moreover, the NYISO continuously monitors all planned projects and any changes to the New York State transmission system, and may request solutions outside of its normal planning cycle if there appears to be an imminent threat to the reliability of the bulk power transmission system arising from causes other than generator deactivation.