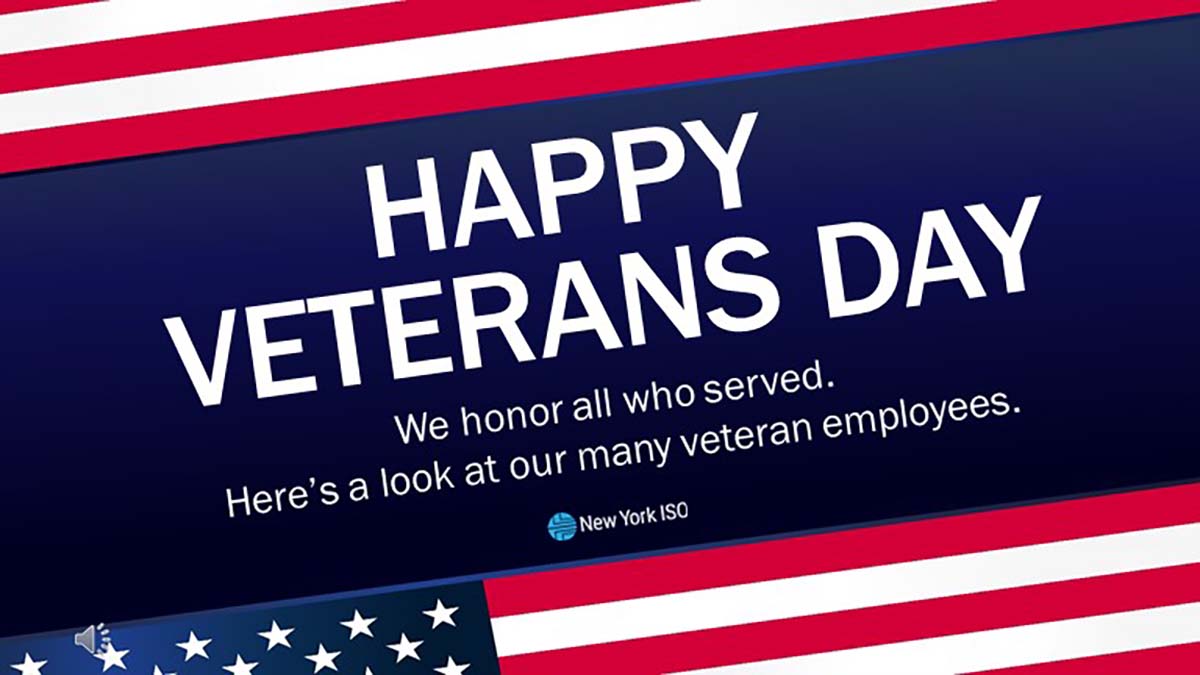 The NYISO has always been a welcoming workplace to military veterans. Nearly 50 vets are currently employed here, in roles ranging from operations to engineering, finance to cybersecurity.

As we celebrate another Veterans Day, it’s a good time to reflect on the value that military experience brings to our organization.

NYISO vets say their experience in the armed forces provided many different skills: leadership, discipline, working with a diverse team, balancing multiple projects, and adapting to change. These are all competencies that they say have served them well while working here.

“One of the biggest benefits of being in the military was getting that experience in leading, and being trusted with that level of responsibility,” said former Army Captain Chris Russell, now manager of Customer Settlements. “It’s an amazing experience and one you can take with you.”

Russell spent four years in the Army, with more years in the Army Reserves. Another veteran, Arthur Gibson, recently promoted to associate IT systems administrator, joined the Army in 2006 for several years, shipping out the day after Christmas. Peter Rivenburg, senior quality assurance analyst, spent four years working on the aircraft carrier USS Enterprise for the U.S. Navy. And Ivan Mercado, now a senior cyber security operations analyst, spent six years in active duty in the Navy, and about 31 years in the Navy Reserves and Air Force National Guard.

“You always have to be prepared,” Mercado said. “That’s the biggest thing. People are relying on me – I have to give one hundred percent. Whatever’s coming at you, you have to be able to react and shine.”

One thing many of these vets have in common is a military family. Gibson’s relatives who served included his father and mother, several aunts and uncles, and both grandfathers. Rivenburg says members of his family have served in every branch (except Space Force, but his son is three, so anything is possible, he joked).

Russell’s dad served in World War II and Korea. He remembers looking at his father’s junior high school yearbook. “Half the boys in the book died in WWII,” Russell said. “That was just the world I grew up in.”

Russell joined ROTC in college and graduated just after the first Gulf War. He began serving as a second lieutenant, and was eventually sent to Guantanamo Bay, Cuba (before it became a prison camp) to work with Cuban refugees. He eventually became camp commander.

“None of us were trained for that,” he recalled. “There was an emphasis on, ‘You’re here because you’re intelligent and we taught you how to lead. Your job is to lead them and succeed with whatever mission we give you.’”

He joined the NYISO in 2007 after working in investments, banking, and venture capital. A few years ago, he began teaching lunchtime training courses on leadership, modeled after training sessions and experiences he had in the military. For one class, he used the Apollo 13 incident (made famous by the Tom Hanks movie) as an example of problem-solving and leadership skills.

“The military was one of the most formative experiences I’ve ever had,” he said.

Gibson now works in IT. In the Army, he worked as a combat medic. “As long as I was not being shot at,” he recalled, “it was a decent day of work.”

These challenging experiences taught him how to prioritize tasks into most critical and less critical while working under a deadline.

“There’s no ‘ego’ in ‘team,’” he said. “I like to think I take direction well. And you can’t be too proud to ask for help. That’s something I definitely learned from my service.”

As the father of an 18-month-old, he added, the ability to stay calm under pressure is useful at home as well.

Mercado joined the Navy in 1983. He joined the nuclear power program and helped run the reactor of the USS South Carolina, a nuclear-powered warship (and serving with two future NYISO operators). After leaving active service and joining the Reserves, he trained in cyberwarfare operations and eventually moved to working with computer infrastructure in the Air Force Reserves. His current rank is senior master sergeant.

“The military has some of the most technically-advanced training. The responsibility that a junior person is tasked with is astounding,” he said. “Where else could an 18- or 19-year-old be tasked with running a nuclear power plant on a ship?”

In the military, he also learned discipline (“You have to accept a challenge and see it to its end.”) and recognizing the various skills different people bring to a team (“It’s almost like a potluck dinner. Everybody brings something.”)

Rivenburg joined the Navy at 19, in 1997, and worked in IT on the USS Enterprise aircraft carrier (since decommissioned). There, some systems were so old they still used punch-cards. But he also learned UNIX, a widely used computer operating system. Such skills continue to serve him well today.

At NYISO, as senior quality assurance analyst, he must work with people all over the company. In that respect, the military was also good training.

“The military is so diverse,” he said. “You’ve got to learn how to handle all different types of personalities. I think that helps in my current role, because I work with a lot of different groups.”

To see all the veterans working at NYISO, watch this video:

At the NYISO, we value all armed service veterans. But you don’t need a military background to work here. We’re currently hiring for a number of open positions.