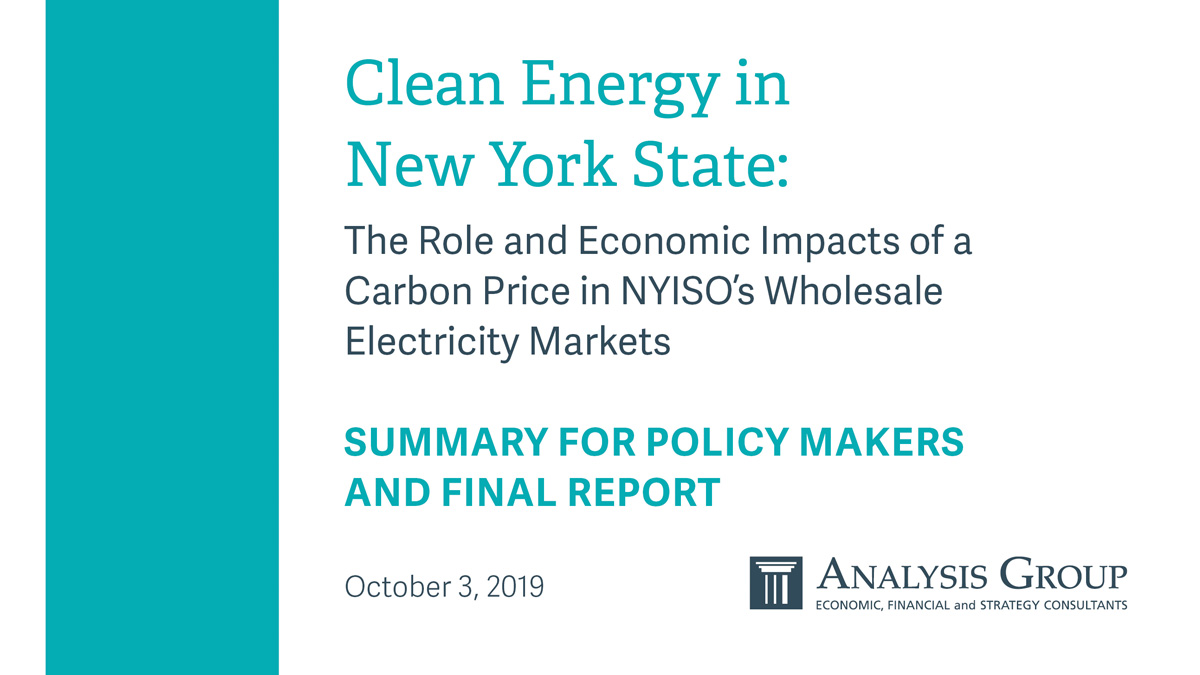 Rensselaer, NY - The New York Independent System Operator (NYISO) today released a new study, conducted by the Analysis Group, of the NYISO’s proposal to incorporate the social cost of carbon into the wholesale price of electricity.

NYISO President & CEO Rich Dewey stated: “We’re pleased that this new analysis shows carbon pricing can help the state achieve its climate goals more broadly and effectively. Reaching the state’s decarbonization goals will require all parties working together closely with every solution available. Competitive electric markets are a strong and proven platform from which to leverage innovation and we look forward to collaborating with the state on the exciting and important work ahead.”

The Analysis Group found the proposal would achieve all of this while reinforcing and enhancing the state’s position as the national leader on climate action.

How would Carbon Pricing work?

The NYISO’s proposal would incorporate a carbon price in the NYISO-administered wholesale energy markets, in dollars per ton of CO2 emissions resulting from power plant operations. The carbon price would be based on the social cost of carbon emissions, which is to be established by New York State.

Power plant operators would include their expected cost of carbon in their NYISO market offer prices, in dollars per unit of electricity sold. While suppliers of power with zero or low CO2 emissions would benefit from higher net revenues, fossil generators’ payments would reflect a deduction for the carbon charges related to their emissions.

Retail electricity suppliers (known as “Load Serving Entities” in the NYISO market) would be charged the locational price for power they need for their consumers, with that price reflecting carbon-related costs. They would also receive a credit to substantially offset the impact of carbon pricing, because consumers would see a portion of the carbon charges collected from generators returned to them.

The carbon charge would provide incentives to suppliers of power with low or no carbon emissions, including innovative low-carbon technologies that may not yet be developed or are unable to be commercial in wholesale markets that do not include carbon pricing.

Imports of power into New York would include a carbon price, to discourage leakage of CO2 emissions from neighboring regions.

Stakeholders were presented with the new analysis on October 3, 2019. Review of the new analysis and further deliberations are underway in the NYISO’s shared governance process, which includes representatives of transmission owners, suppliers, consumers, and environmental interests. If supported by New York State and ultimately approved by NYISO stakeholders, the NYISO’s independent Board of Directors and the Federal Energy Regulatory Commission, Carbon Pricing in the wholesale markets would be implemented. With these approvals, carbon pricing would be implemented in the NYISO markets no earlier than the second quarter of 2021.

View summary of the study.