The Road to 2040: Our Role Expanding Transmission to Meet the Needs of a Clean Energy Grid

The Road to 2040: Our Role Expanding Transmission to Meet the Needs of a Clean Energy Grid 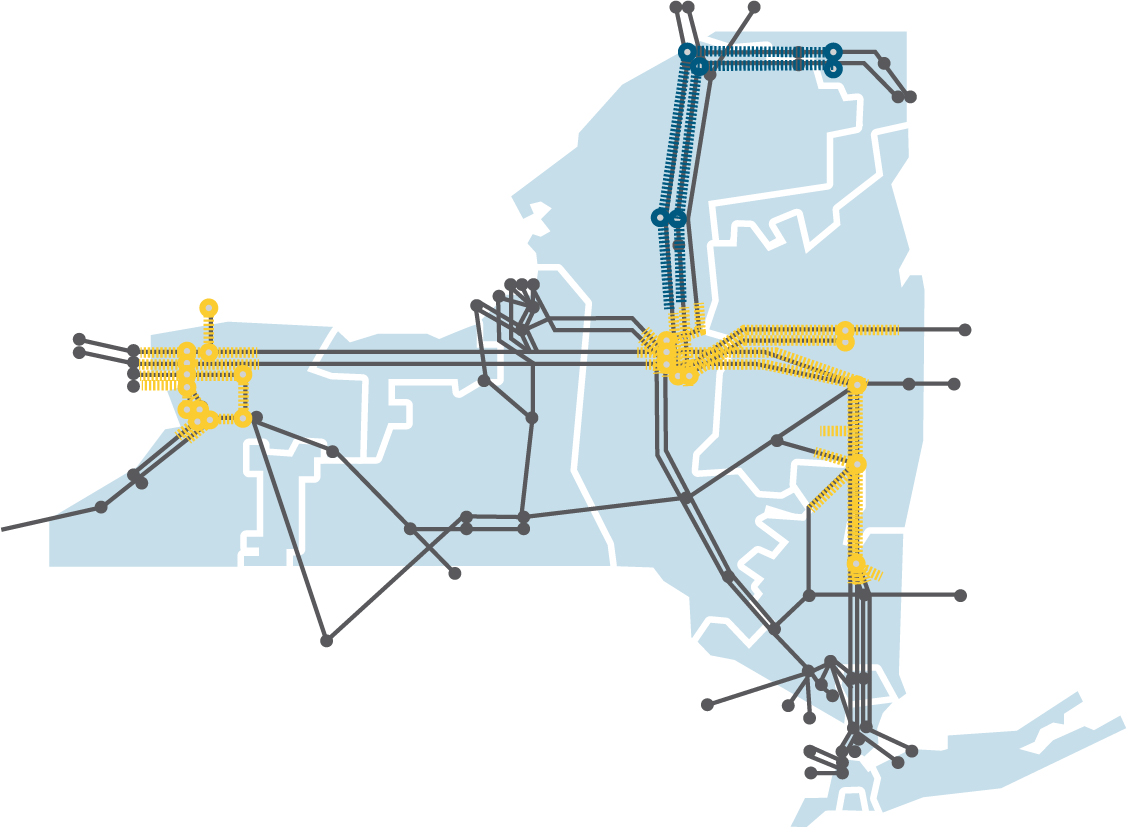 Transmission developers are making the biggest investment to the energy grid in a generation, investing $2 billion on upgrading transmission lines around the state. These multiple projects, which will help prepare us for the grid of the future, came about in part through our work in planning for future needs and working with developers and regulators.

The nature of transmission in New York today is what we deem “The Tale of Two Grids.” Upstate is where most of today’s clean energy is located, including wind farms and nearly all the hydropower. And in downstate, where a majority of the energy consumption in the state takes place, energy is generated  almost exclusively by fossil fuels. 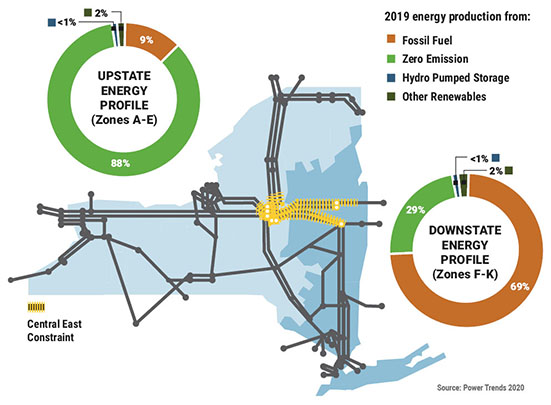 For years, the difficulty has been getting the energy from where it’s generated to where it’s consumed. Congestion on the transmission system limits the ability to move clean energy supplies from upstate generators to downstate consumers. Under the Climate Leadership and Community Protection Act (CLCPA), the state has called for a 70% clean energy grid by 2030 and a 100% emission-free grid by 2040. Meeting these mandates requires addressing transmission congestion. To that end, a number of efforts are being undertaken to reduce congestion and increase the flow of clean energy.

Our experts use sophisticated computer modeling to determine energy needs, ranging from a few weeks to 30 years in the future. These planning processes led to two major projects currently under construction that will expand the ability to move large amounts of energy around the state.

Our planning processes identify transmission limits that inform the state’s declaration of a “public policy needs,” recognizing the need for transmission upgrades to achieve clean energy goals. Once the public policy was set, our further role was to solicit projects from market participants, evaluate proposals to make sure they would meet the needs mandated, and recommend the projects that best meet these needs.

Last year, the state Public Service Commission (PSC) approved a plan to construct the Western New York public policy project that will be added to an existing right-of-way from Niagara to Erie counties. The estimated 20-mile, $181 million project, when complete, will make the 2,700 MW of renewable energy from Niagara Falls fully available, and transfer an additional 1,000 MW from Ontario during emergency conditions.

Both sections require the demolition of aging transmission lines and towers in order to build new towers and lines that can handle a greater amount of electricity within the existing rights-of-way. Construction for all three projects is under way. 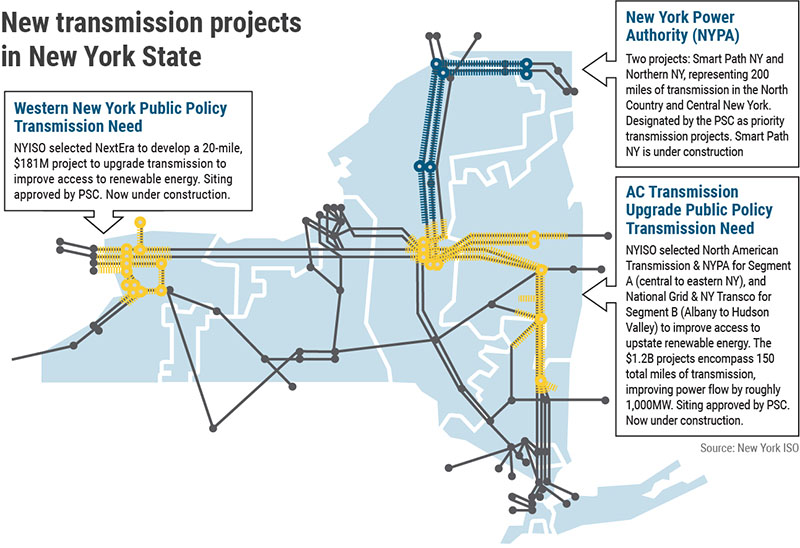 We continue to play a role in these transmission projects by preparing the grid to operate during line outages that are necessary to allow for the installation of new equipment.

NYPA’s total investment in transmission projects is expected to be $726 million. 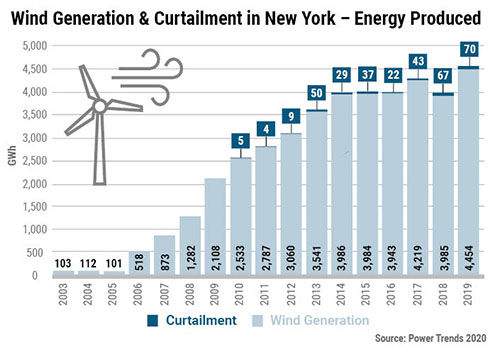 New transmission work is also important because of the so-called “peaker rule,” which will require that fossil fuel generators, totaling about 3,300 MW, meet tightening regulations on smog-forming pollutants beginning in 2023. Many peaker plants are located within load pockets in New York City and Long Island. These are transmission-constrained geographic areas where electrical demand sometimes can only be served by local generators. We conduct reliability planning and analysis to consider the impact of the peaker rule and will identify opportunities to address constraints.

As we move to a grid of the future, new transmission needs are continuing to be evaluated. New York State recently declared a third public policy project to support the delivery of energy from offshore wind facilities to Long Island and New York City. The NYISO filed comments to the PSC supporting this need, which is necessary to achieve the objectives of the CLCPA. We will continue to play a central role in collaborating with regulators and transmission owners. Look for continued discussion of the Road to 2040 in future blogs. 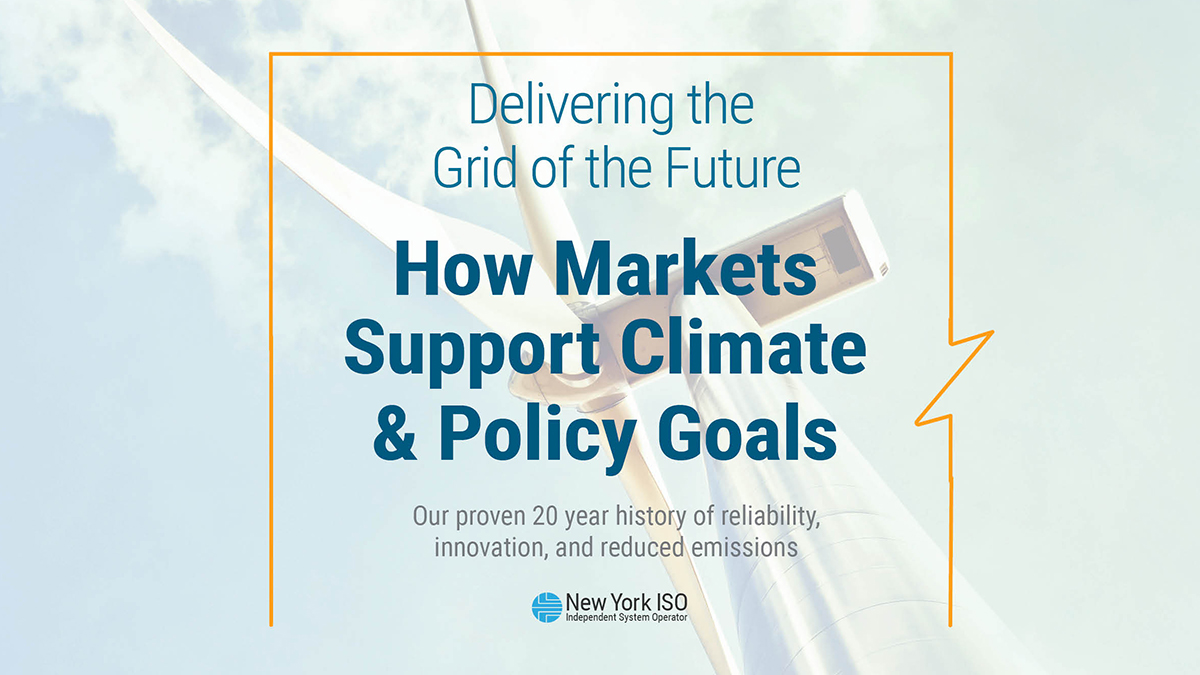 Our latest eBook, How Markets Support Climate & Policy Goals, details the role our competitive energy, capacity and ancillary markets play in delivering the grid of the future and our role helping New York meet its goals of a zero-emission energy grid. 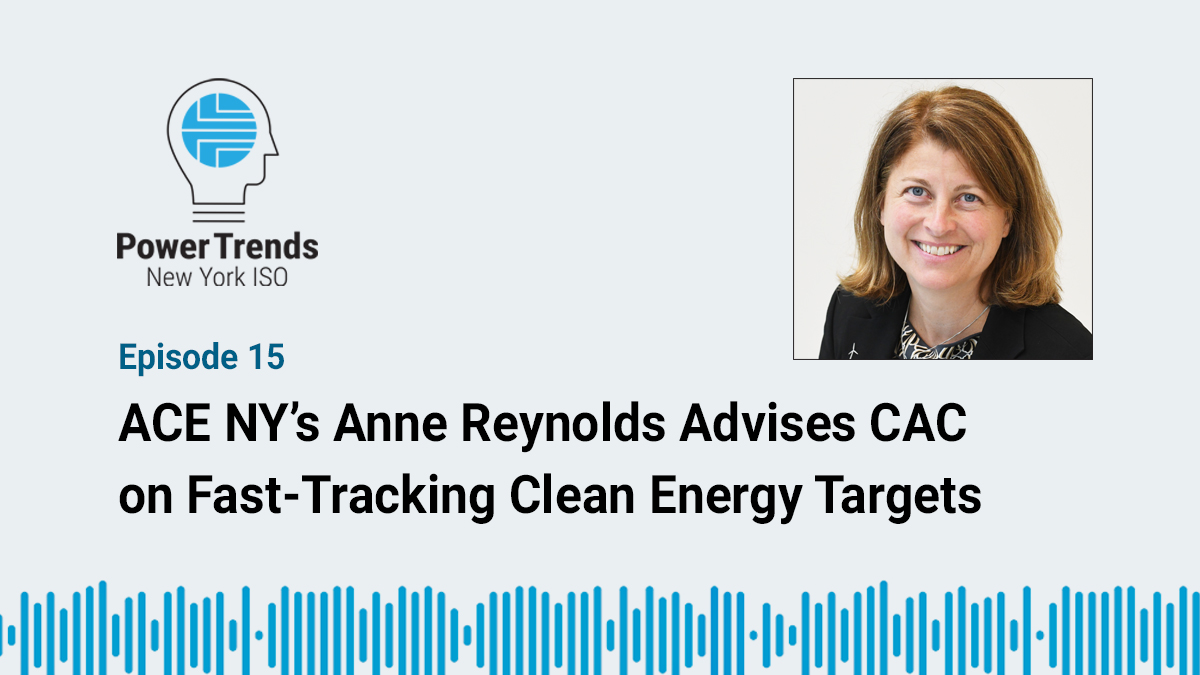 Anne Reynolds joined the Alliance for Clean Energy New York (ACE NY) as Executive Director in 2014. But she has spent her career working on clean energy and environmental issues, including on numerous state programs to help ease the transition to emission-free resources in New York. 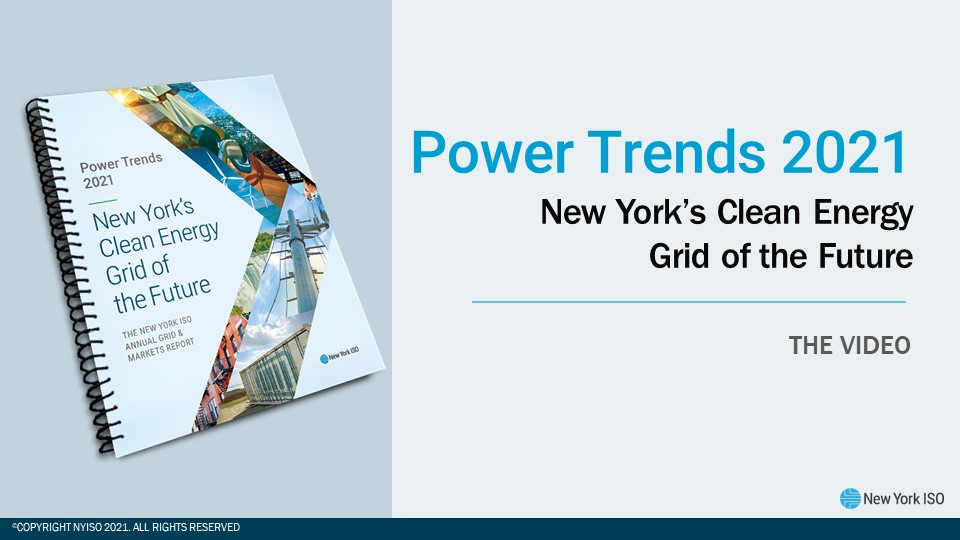 Our Power Trends 2021 report outlines our commitment to maintaining grid reliability in these times of change while detailing how the power grid is evolving to meet public policy objectives.